Easily accessible and with a variety of sights and activities, the Grand Western Canal is one of Devon’s most popular outdoor attractions.

The Grand Western Canal extends for 18km from the Canal Basin in Tiverton, weaving through the mid-Devon countryside to its end at Lowdwells, near the Somerset border. With its wildlife, walks, cafes, fishing, boating and many sights along the way, the canal has something for everyone.

The Canal Basin at Tiverton

There’s plenty of parking (pay & display) at the canal basin, just follow the signs from Canal Hill. At one end of the car park, by the ramp up to the towpath, you’ll spot the very quaint Canal Tea Rooms and Gardens, offering traditional Devon cream teas and other snacks. Make your way up the path or steps to the canal basin itself. Even if you don’t venture far along the water, the canal basin has plenty to offer. Sit by the still waters and enjoy a picnic, or visit Duck’s Ditty Bar and Beer Garden, open from Easter each year. This cosy, colourful, converted barge serves snacks, drinks and ice cream. There’s a small play park for younger children and a visitor centre will lots of information and some interactive games. 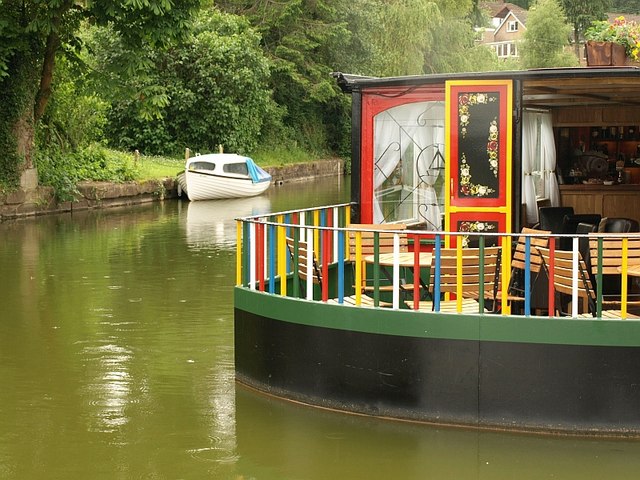 One of the most charming attractions of the park is the 75 seater horse drawn barge which operates out of the Canal Basin at Tiverton April to October. One of the last remaining examples of its kind in Great Britain, the barge is the most relaxing way to spend a few hours on the canal. Refreshments are available and staff dress in period costume. Public and private hire are both on offer. This serene video gives you an excellent impression of what a trip on the barge is like. Make sure you have the sound on to enjoy the gentle clip-clopping! 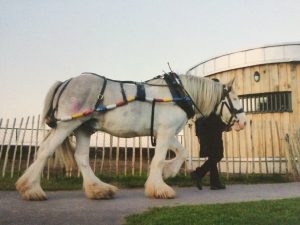 The History of the Grand Western Canal

The birth of the canal in 1814 saw the opening of a stretch between Tiverton and Westleigh. It was extended towards Taunton in 1838, but it wasn’t financially viable to complete the intended distance between the English and Bristol Channels. It was briefly profitable in the 1840s for carrying coal the limestone, but the incoming railways were just too much competition. Between 1840 and 1960, the canal became less and less profitable. The section between Lowdwells and Taunton was abandoned and other parts of it falling into disrepair. It has been owned by Devon County Council since 1971, when they declared it a Country Park. With its scenic walks and abundant wildlife, it is now one of the most popular outdoor attractions in Devon. 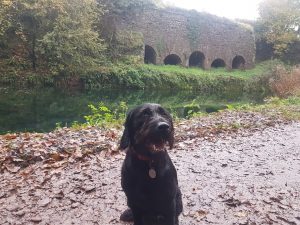 Doggy visitor to the Lime Kilns

Walking and Cycling along the Grand Western Canal

With a well-surfaced and level path along the entire length of the canal, the whole 18kms are easy and accessible to walkers, buggies, cyclists and runners. There is an excellent, illustrated map which shows you its various sights and where you can park. There are plenty of benches and picnic spots at which to take a rest and absorb the beautiful surroundings. Cycle hire is available from Abbotshood Cycle Hire, which operates out of The Globe Inn pub car park at Sampford Peverell. 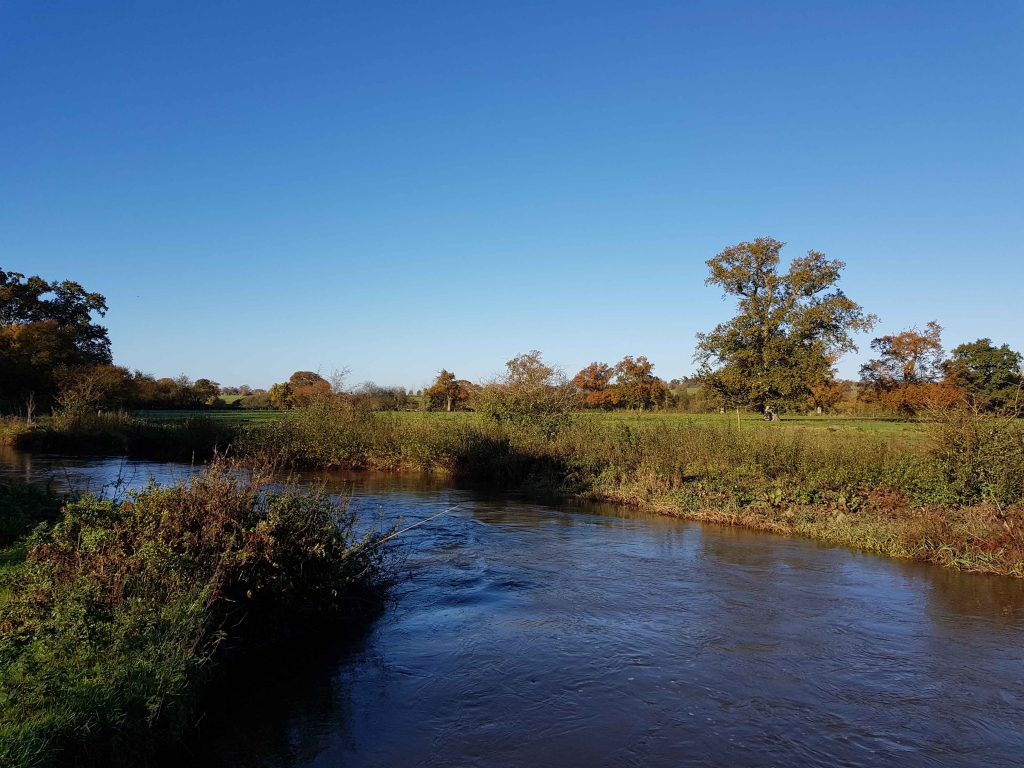 Necessarily, with the towpath running along one side of the canal, walking along in one direction means retracing your steps back in the other direction at some point! However, you can enjoy a circular walk on the Swans Neck route, briefly leaving the canal side to incorporate a visit to Halberton Court Farm Shop and enjoy the delicious cakes available at the Swans Neck Cafe. Park at either Greenway Bridge or Tiverton Road Bridge car park and follow the signs. 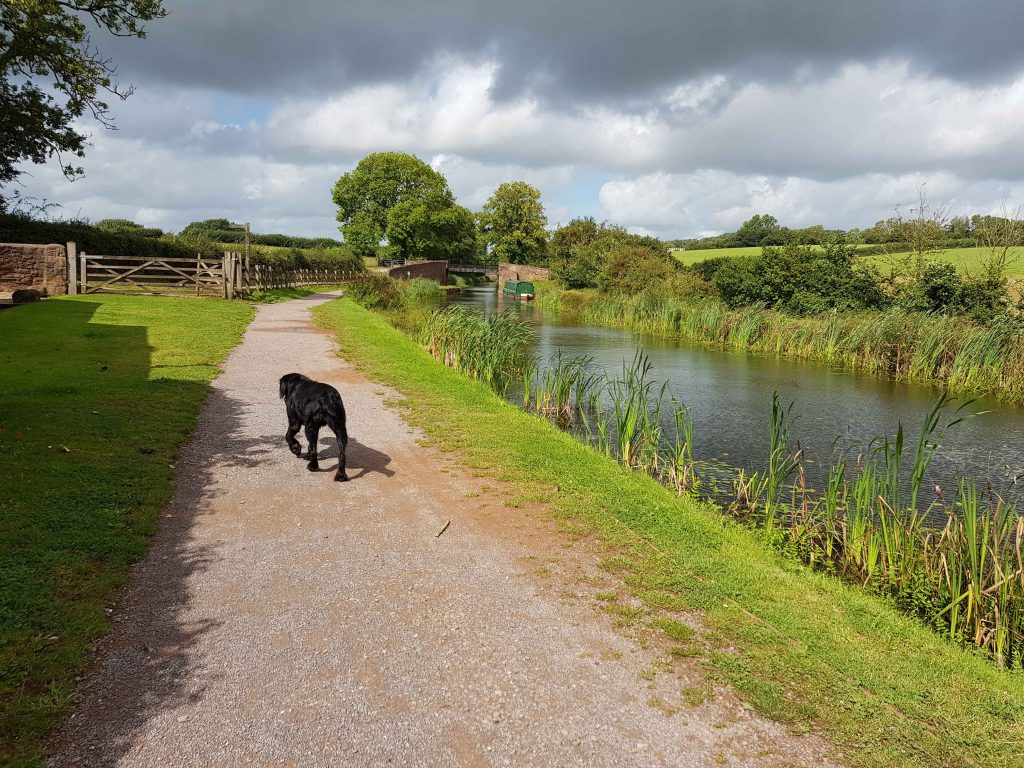 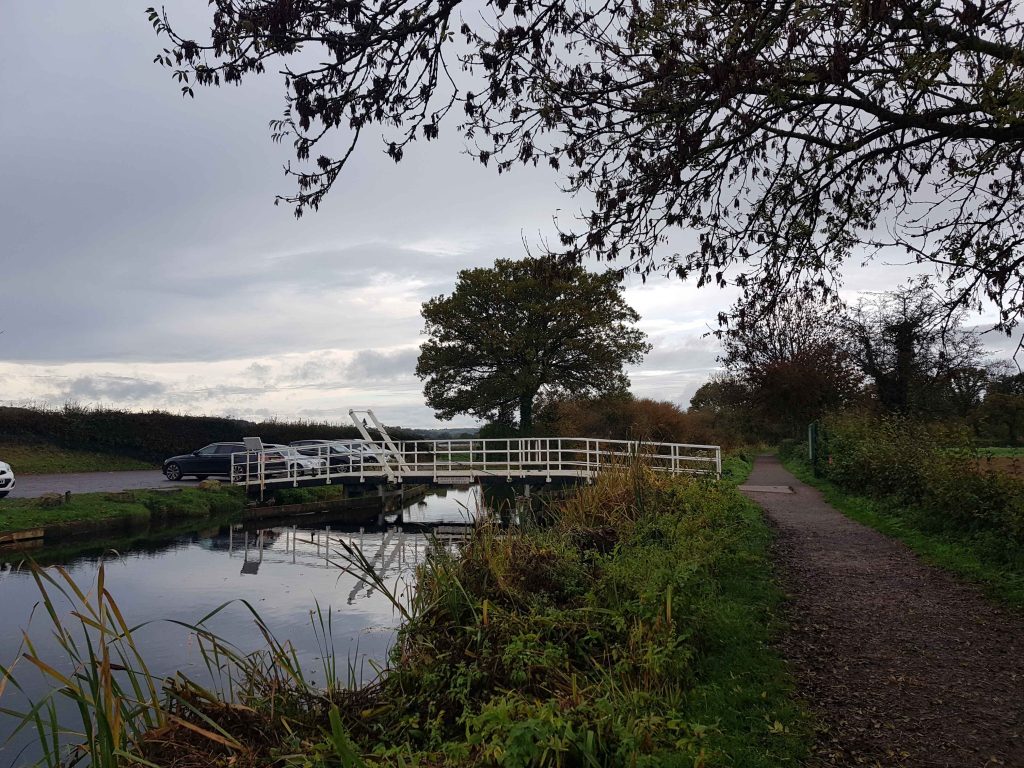 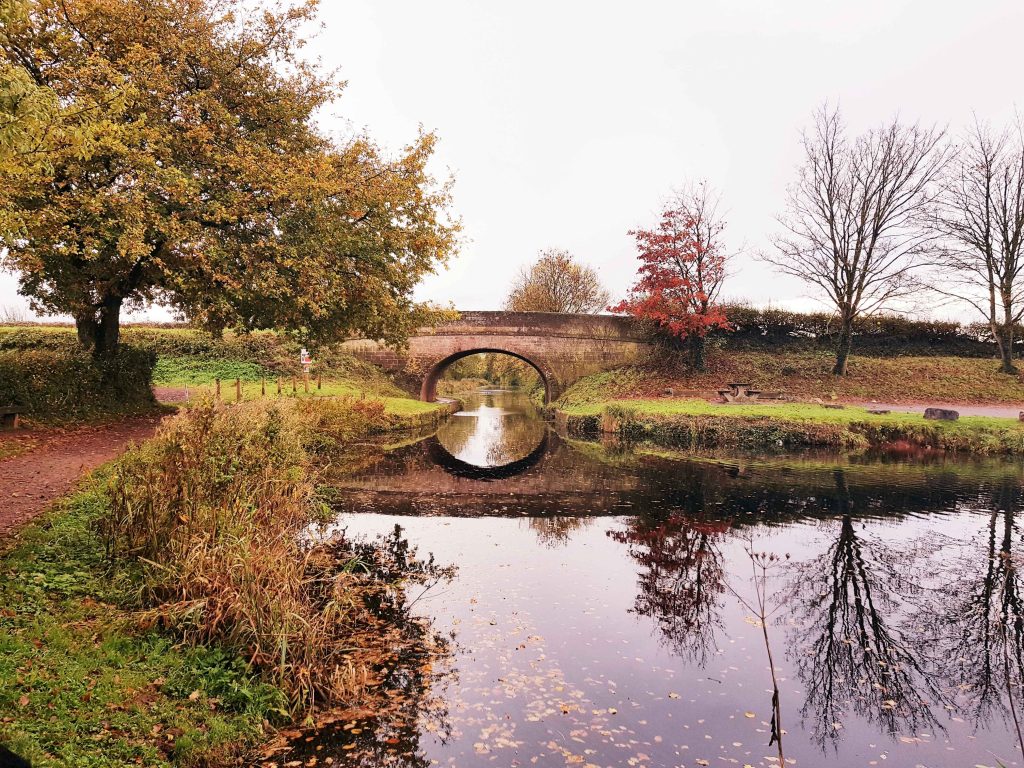 Other points along the 18km stretch include:

Ayshford Chapel – You can’t enter the chapel from the towpath, but you gain a pretty view of it from across the water.

Halberton Aqueduct – engineered by Isambard Kingdom Brunel in 1848 and designed to carry the existing canal over the new railway beneath.

Waytown Lime Kilns – This row of five lime kilns from the early C19th is still clearly visible at the Lowdwells end of the canal. 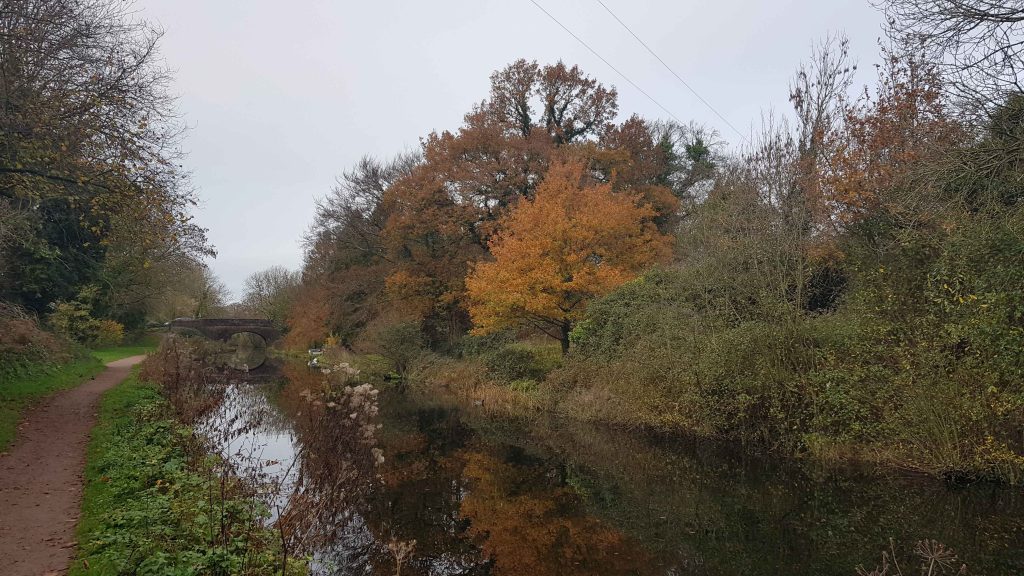 Autumn Colours on the Canal 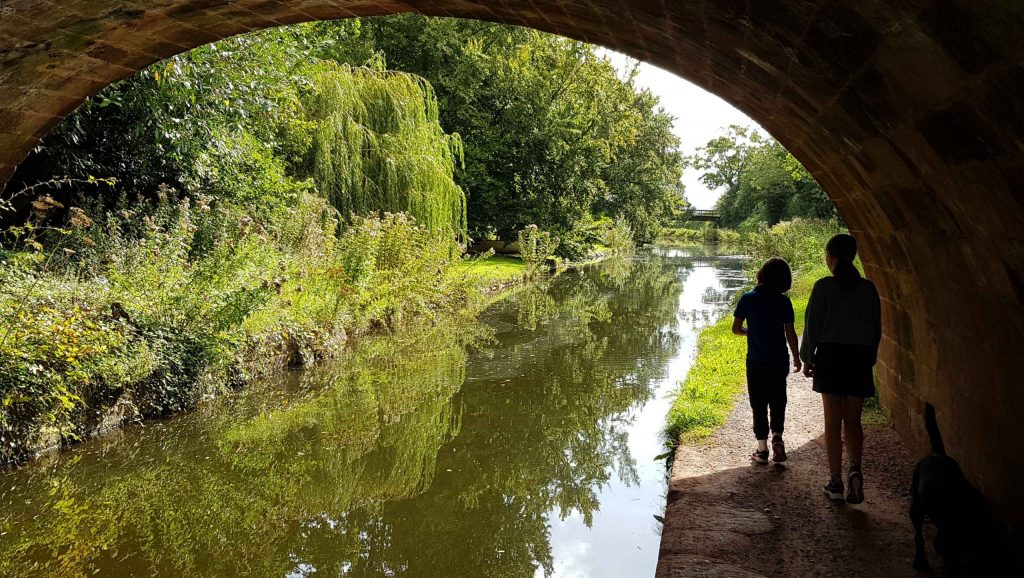 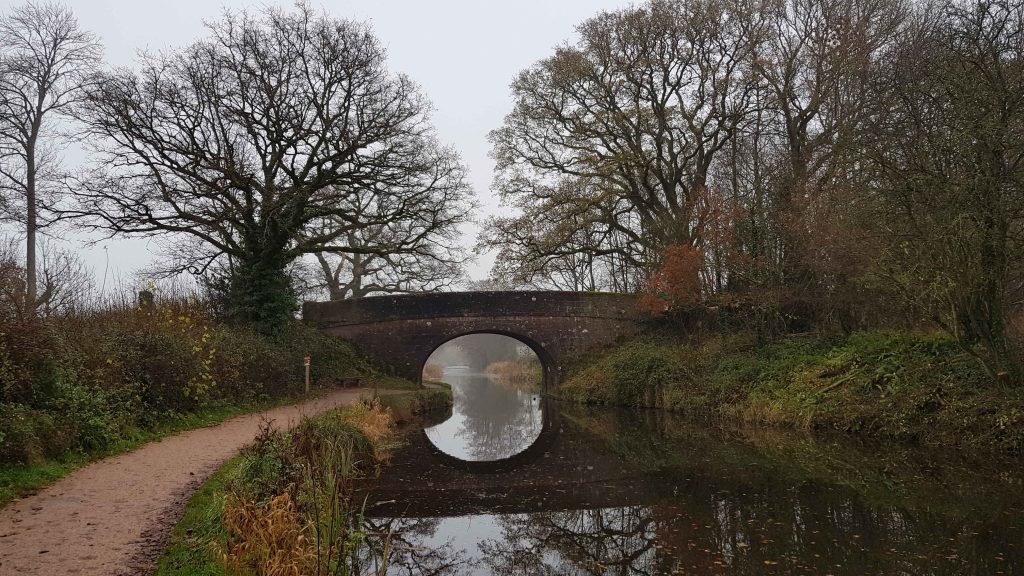 Wildlife on the Grand Western Canal

Birdlife is abundant on the canal. The iridescent green flash of a kingfisher, flitting from branch to branch along the waterside, is a really special sight. Look out also for goldcrests and woodpeckers. Waterfowl include moorhens, mallard ducks and mute swans. Early summer is the time to visit if you want to see the cute cygnets following their parents through the reeds. 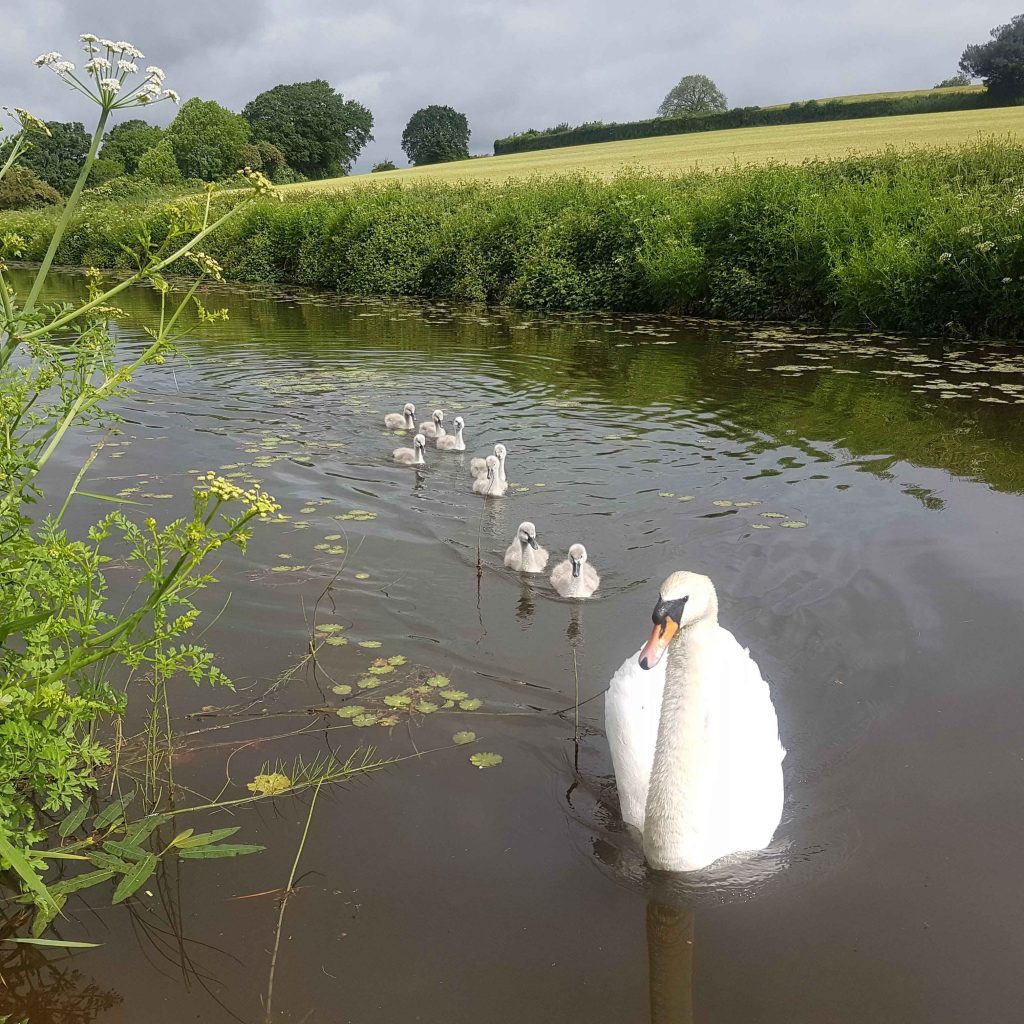 A Swan and her Cygnets

The colours of plant life on the banks of the canal change with the seasons. From the bright yellows and greens of spring, blues and purples in summer and the russets and bronzes of autumn. The hedgerows and woodland bordering the towpath, as well as the fields beyond, are havens for wild mammals such as foxes and badgers. You’re also likely to spot frogs, especially in spring.

Fishing on the Canal

The gentle landscape and easy access make fishing on the Grand Western Canal a popular sport. The canal is well-stocked with pike, perch and tench. You must have both an EA Rod Licence and a Tiverton and District Angling Club Licence to fish. More information and license prices can be found on the Devon County Council website.

Boating on the Canal

Colourful, traditionally decorated barges can still be seen moored along the canal, especially at the aqueduct at Halberton. Paddling the canal is a fantastic way to see the local wildlife. To use your own boat on the water, you will need a permit, but rowing boats and Canadian canoes can be hired from the Tiverton Canal Company. 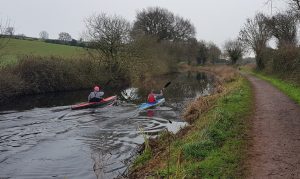 Kayakers on the Canal

The canal has an active Facebook page, where you can find out more and see some wonderful pictures of the canal and its wildlife.

All images by Maria Thorne, unless otherwise stated.