From worm charming to orange chasing, find out more about the wide range of traditional events still taking place locally.

With hundreds of TV channels to choose from and the online world at our fingertips, it’s reassuring to know that there are still some traditional forms of entertainment that continue across this part of the country.

The majority taking place in Autumn, the illuminated carnivals that take place along the high streets of local towns bring a bit of sparkle to the shortening days. Nearby Sidmouth and Honiton carnivals have enjoyed brightly-lit, themed “floats” parading through the streets for decades. Many local organisations take part, their members donning carefully-crafted costumes and performing to well-known music on moving platforms. Bridgwater Carnival is one of the largest and most famous, lasting between 2 and 3 hours. 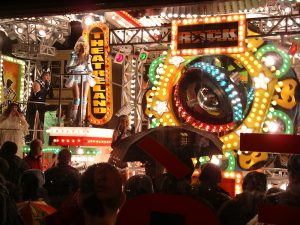 Along the same theme of celebrating light – or more specifically, fire – Ottery St Mary Tar Barrels is a custom which probably dates back to the 17th Century. It takes place every year on 5th November. Barrels well-coated with tar are set alight one at a time outside pubs in the town. The flaming barrels are then carried on the shoulders of brave locals who run through the hoards of spectators until each barrel eventually disintegrates and is thrown in splinters to the ground. Smaller barrels are carried first by children, before the women’s and men’s barrels are lit later in the evening. 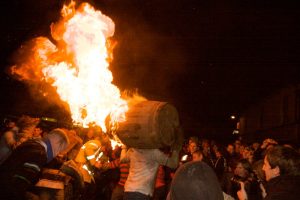 The Duchy Town of Bradninch celebrates on 6th January every year with a lantern parade and bonfire. To celebrate the end of Christmas and the start of the New Year, participants parade through the streets carrying home-made paper lanterns and making as much noise as possible, followed by singing and dancing at the town hall. They then take their spent Christmas trees and lanterns to a big bonfire to be burnt. You can see a lovely video roundup of previous 12th Night celebrations by Catriona Smith on YouTube.

In commemoration of Sir Francis Drake, the Totnes Elizabethan Society continue to organise Orange Races during which competitors much throw or kick their fruit along a half-kilometre course. They’re not allowed to pick it up and carry it and the orange has to stay fairly intact by the finish. This is said to commemorate the legend that Drake once dropped his basket of oranges, which were then chased down the street by the local people.

Yes, you read that correctly! You might have heard of snake charming, but this skill is aimed at enticing the less dangerous creature, the worm. With various techniques – all intended to produce the necessary vibrations through the ground – participants in Blackawton Worm Charming encourage as many of the little annelids as possible out of their allocated patch of earth. Find out more about the fairly recent history of this competition and find some great photos of this quirky event on their website. 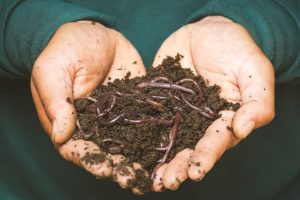 Was Ottery St Mary indeed once occupied by pixies? Legend has it that when humans ‘took over’ and built a church, the noise of the bells drove those pixies to distraction since each toll of the bell meant the death of one of their kind. They captured the bell ringers and held them in ‘Pixie’s Parlour’, a cave by the river. Fortunately, the bell ringers escaped, but the story is celebrated each year in midsummer. Local children play the part of the pixies. They ‘capture’ bell ringers, who always manage to escape. Their evasion is then celebrated into the evening.

The Goose Fair is held on the second Wednesday of October, when the town welcomes hundreds of traders to various locations in the town. The fair is likely named after the geese brought to the market to be sold to people wanting to fatten them up for Christmas. According to the website, the more traditional side of Goose Fair can still be found at the Tavistock Livestock Centre. They usually hold an open day where you can see cattle, sheep and Dartmoor ponies, and enjoy the auction of live geese and poultry. 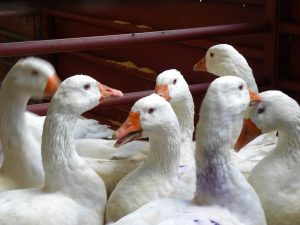 Widecombe Fair has existed since at least the 17th century as an opportunity for Dartmoor farmers to show and sell livestock. It has since been extended to include rural crafts. You might have heard of it because of the famous folk song of the same name. The Legendary Dartmoor website includes this interesting article about the history of Widecombe Fair, including the well-known lyrics featuring “Uncle Tom Cobley and all”: https://www.legendarydartmoor.co.uk/widde2-fair.htm. 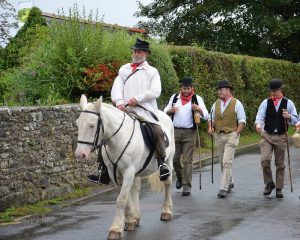 We’re always keen to hear about interesting local events. Let us know if you find a new one!