If you’ve been feeling hemmed in lately, we have the perfect cure!

Exmoor and Dartmoor both have hundreds of square miles to explore and we’re fortunate at our Devon holiday park to be situated between these two wonderful and very different National Parks. Both were designated National Parks in the 1950s, which means that they have been set aside by the government for the preservation of the natural environment. If you’ve been longing to get out into nature, then both Dartmoor and Exmoor have it in abundance.

Dartmoor is home to some of England’s last great wilderness. It’s wild, open and – covering 368 square miles – vast. You don’t have to venture far into Dartmoor to experience its stunning panoramas.

With 160 tors (high, rocky, granite outcrops) to discover, you’ve hundreds of views waiting for you. The granite foundations of the moor date from the Carboniferous Period of geological history. Of all its tors, Haytor is the most well-known and is home to the Dartmoor National Park visitor centre, but try exploring the picturesque Hound Tor with its deserted Medieval village, or High Willhays (the highest tor on Dartmoor). 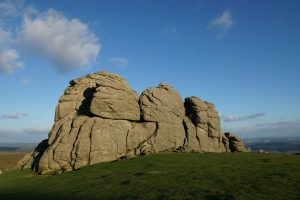 Remnants of the moor’s Bronze Age heritage are studded across the landscape. The best known of its prehistoric settlements being Grimspound. Merrivale Stone Row is an avenue of standing stones, easily accessed from the road between Two Bridges and Tavistock. 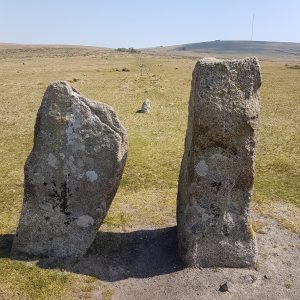 The fast-flowing Dart, from which the moor takes its name, starts as the East Dart and West Dart, which become a single river at Dartmeet. The river leaves the moor to flow through Totnes and eventually reaches the sea at Dartmouth. The River Teign also rises on Dartmoor, flowing through the stunning Teign Gorge and on to Fingle Bridge, a beauty spot with a C17th stone bridge and popular pub with plenty of outdoor seating. 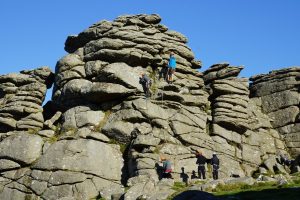 Rock climbing on a Dartmoor Tor 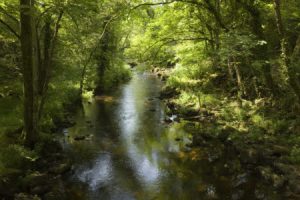 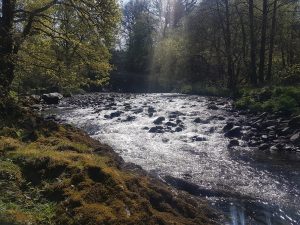 For a relaxing place to visit, try Fernworthy Reservoir. Wistman’s Wood, not far from Two Bridges, is an ancient, stunted oak forest, littered with moss-covered granite bolders. It has a definite ‘Lord of the Rings’ feel. Here’s a Countryfile guide to walking at Wistmans Wood.

Exmoor National Park is smaller, at 267 square miles and stretches from West Somerset to North Devon. Two thirds of it is in Somerset, with the remaining third in Devon. Whilst Dartmoor is dramatic, vast and wild, Exmoor is softer and somewhat greener, with rolling hills, stunning coastline and little villages nestled in valleys. Walking is arguably less challenging, but you should still be prepared for fast changes in weather. 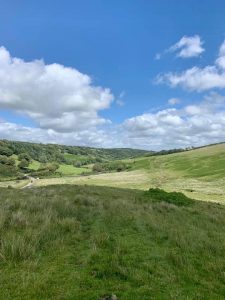 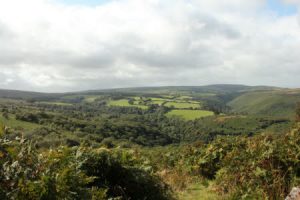 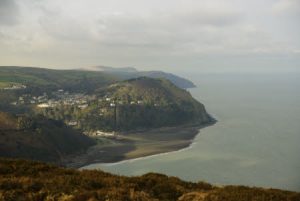 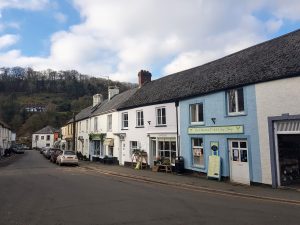 Exmoor has the highest coastline in England and Wales and much of it is incredibly sheltered. Visit the historic, picturesque harbour at Porlock Weir, or stop in on Lynton and Lynmouth – an area dubbed ‘little Switzerland’, with a unique funicular railway to transport you from one village to the other. The Valley of the Rocks, near Lynton is a very dramatic section of coastline, where it’s not unusual to spot wild goats!

Valley of the Rocks

‘Clapper Bridges’ can be found on both Exmoor and Dartmoor. A clapper bridge is formed by arranging massive slabs of rock on top of stacks of stones. There’s no cement or metal girders involved. It was a technique used to build bridges before modern engineering methods had been introduced.

Tarr Steps on Exmoor is a beautiful spot from which to explore, with easy parking and both shorter and longer walking trails. There’s a pub and also plenty of space for a picnic on a sunny day. Cross the bridge over the River Barle to begin a scenic valley walk.

The clapper bridge at Postbridge on Dartmoor is said to be one of the finest in the country. You’ll find a useful visitor centre from which to explore the local area. 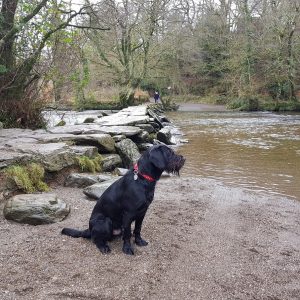 You can find semi-wild ponies on both Dartmoor and Exmoor. The Exmoor ponies have developed very little from original Stone Age Species and are now considered to be endangered, whereas Dartmoor ponies have bred with other species over the centuries. There are attempts to try and preserve a pure ‘Dartmoor pony’ breed. They can be very inquisitive and, whilst they may look friendly, it’s best to keep a distance – for their safety and yours! Find out more about these beautiful creatures at the Exmoor Pony Centre and Dartmoor Miniature Pony Centre. 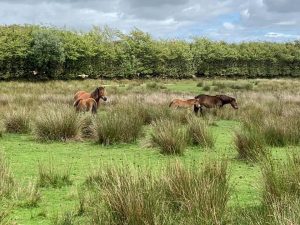 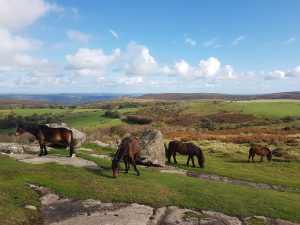 Dartmoor provides a unique habitat for birds that are rare in other parts of the UK, including the ring ouzel and the cuckoo. You will often hear the distinctive call of stonechats (which sound like marbles bashing together), and the gorgeous song of the skylark.

Exmoor is famous for its red deer, their majestic presence attracting visitors to the area, particularly in autumn. It is also one of the most important areas in the UK for butterflies. Find a range of Exmoor wildlife guides on the National Park’s website.

On a rainy day, head for an indoor experience and visit one of the moorland castles. Dunster Castle sits atop the chocolate-box village of Dunster in NE Exmoor. A former Norman fort, it was refurbished in the C17th. 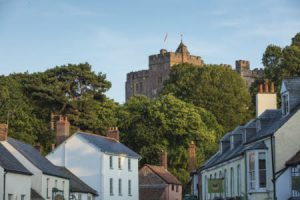 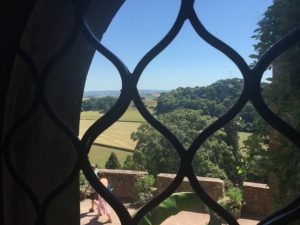 Castle Drogo, overlooking the Teign Valley, was the last castle to be built in England. This austere granite building, designed by Sir Edwin Lutyens offers fascinating insights into the life of the gentry in the early C20th. 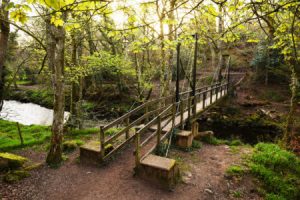 Local Tales of Exmoor and Dartmoor

We could write a whole blog just about Dartmoor ‘ghost stories’ and several books are available on the subject. Dartmoor certainly takes on a mysterious air, particularly when the mist rolls in. It was in Princetown, the home of the intimidating Dartmoor Prison, at the turn of the last century, that Arthur Conan Doyle wrote The Hound of the Baskervilles. Some driving accidents on the winding road between Postbridge and Princetown are said to have been caused by ‘the Hairy Hand’ – the disembodied limb of a worker at the nearby powder mill – which attempts to kill motorists by pushing them off the road.

The most well-known tale of Exmoor involves a certain puma-like beast, whose activities were first reported in the 1970s. Firm evidence of the ‘Beast of Exmoor’ has yet to be established, but it’s thought that there may be a small population of big cats in the area, resulting from the restrictions of the Dangerous Wild Animals Act of 1976 bringing about their release into the wild.

Paranormal stories aside, the two moors both have wonderful tales to tell and we look forward to hearing all about yours. If you find somewhere on Dartmoor or Exmoor that you think we should be recommending to our guests, let us know.